This is the last in a suite of five scenarios developed by Aleph Insights, designed with the following question in mind:

More background on the scenario development process, including caveats about scenario interpretation, is here. The baseline scenario is The Great-Again Gatsby. The other three alternative scenarios are Atlas Hugged, Fear and Loathing in Everywhere, and We Need to Talk about Donald.

This scenario differs from the baseline in its assumptions about the US’s international position, and in particular its relationship with China.

Against the advice of Washington experts and his military chiefs, in the first few weeks of taking office, President Trump pointedly refused to affirm in unequivocal terms the US’s support for NATO, and has been evasive when questioned about his response to various Article V scenarios involving Russia and Eastern Europe. Although senior Representatives and NATO allies have emphasised that the US is bound to the Alliance regardless of the President’s statements, there has been clear nervousness internationally since Trump took office. Trump’s approach has been to build international trust through his personal relationships, in particular with Putin (“he’s also a guy who cares about getting a good deal”), rather than to trust in international bureaucracies.

But to many other governments, Trump’s approach is naive, and viewed as either a threat or an opportunity, depending on the nature of their historic relationship with the US. In 2018, Russia began to strengthen cooperation with China through an enhanced and more militarised Shanghai Cooperation Organisation. The improved military and economic cooperation in the East mean that China and Russia have acted with a greater sense of immunity from potential US curbs to their power (such as US sanctions or diplomatic efforts), which in turn has emboldened their approach to international affairs. 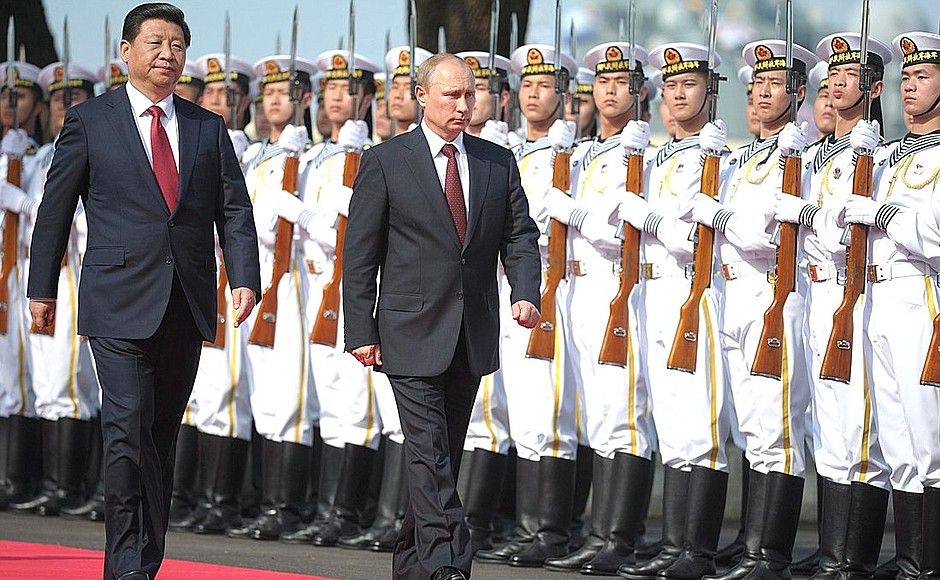 Partners
(Photo: Kremlin)
EU-US trade relations have been undermined by Trump’s protectionist tendencies. America’s traditional European allies feel cut adrift and have felt compelled to reach their own agreements with a resurgent Russia and an increasingly muscular China. Asian democracies, meanwhile, have been increasingly alarmed about the unfettered reach of China across its expanding sphere of influence, torn between maintaining cordial relationships with China due to economic necessity, and confronting China over its ever more confident assertions about various disputed territories. By mid-2018 tensions in the Pacific are high.

Exacerbating these tensions, President Trump remained true to his word by imposing tariffs on Chinese imports. His negotiating style has been confrontational and theatrical, involving sound bites and ultimatums. Successive trade agreement talks have fallen through, and the US has threatened increased levies on Chinese goods imported by the US. The impact of this impasse between the world’s two largest markets has started to be felt by the global economy. Growth has slowed markedly and free trade is diminished. While the US is insulated from some of the most severe effects of this ‘global cooling’, consumers have seen prices of most goods rise in real terms, and are struggling to afford many foreign-produced technology goods (although US manufacturing has seen a short term boost in sales).

It is against this backdrop that, in mid-2019, a crisis occurred with echoes of the Hainan Island Incident of 2001. During uncomfortable trade negotiations with China, the White House was forced to issue a press statement about a ‘maritime incident’. The statement referred to an unspecified US Navy vessel being involved in a collision with a vessel of unknown origin in international waters near Okinawa. After only a few minutes, Press secretary Hope Hicks ended the session in the packed White House press room by saying “Sorry, we have no more details at this time”.

China Central Television subsequently reported that: “A US nuclear-armed submarine was discovered patrolling Chinese national waters and has collided with a Chinese submarine on a routine and peaceful patrol. Both vessels were heavily damaged, and despite the heroic efforts of her crew the Chinese Shang-class submarine was lost with all hands. The brave People’s Liberation Army Navy rushed to the aid of the USS Georgia which was forced to the surface without power and would have sunk without Chinese assistance. Our heroic sailors are currently towing the stricken US boat to port, and all surviving US crew are under the watchful care of Admiral Wu Shengli.”

The Pentagon immediately entered crisis mode and the State Department began frenetic attempts to negotiate the safe return of the US submarine. The implications of a state-of-the-art US submarine containing its full complement of nuclear-armed ballistic missiles falling into Chinese hands did not need to be spelled out. The US boat was swiftly taken to port in Shantou, as the Chinese government stated that it was seeking to ‘guarantee the containment of potentially hazardous materials’ and also ‘offer the highest level of medical care for the wounded’. President Putin has offered to send search and rescue ships to attempt to raise the lost Chinese boat, equating the loss to the Kursk disaster.
Bad Memories: the Wreck of the Kursk
In response, the US quickly mobilised the Pacific Fleet, sending a carrier group to international waters 70 miles from Taiwan, to ‘provide support and monitor the delicate situation’. Meanwhile, a number of plausible excuses were given to delay China’s return of the damaged submarine and its crew. While the Chinese have avoided any overtly provocative actions, such as parading the crew on television, they have questioned the aptitude of the US submarine commander and decried the violation of Chinese sovereignty that his alleged incursion represented. Japan and South Korea were drawn into the war of words, expressing deep concern about the proximity of US nuclear weapons so close to friendly nations in the Western Pacific. The US rebutted the accusations of violating Chinese waters, but refused to release details about the patrol path of the vessel. The debate about the true position and intent of the two submarines has been rancorous. Moscow and other members of the Shanghai Cooperation Organisation have expressed solidarity with China and offered assistance to “bring a swift and peaceful resolution” to the incident.

China too has mobilised its own naval presence in the area, and the proximity of the two fleets has become a cause for grave international concern. Chinese ships have had daily encounters with reconnaissance aircraft operating from the US carrier fleet. There have been a number of near misses in bad weather between the US aircraft and their Chinese interceptors. By the end of 2019 the situation has not been resolved, and China has largely been seen as winning the communications war. In November it offered a cynical ‘gesture of goodwill’ to the US families of the naval personnel still under guard in China, inviting them to visit for Thanksgiving at the expense of the Chinese people. The US government was able to do little to prevent the media circus of US families being greeted on Chinese soil.

President Trump and his entire cabinet have been heavily criticised by the media for their handling of the situation. European leaders have universally called for de-escalation of the situation, to be mediated by the UN, and pundits are seriously discussing triggers and likely outcomes for an armed conflict between China and the US. Public consciousness and cultural discourse has become filled with the imminent threat of war. The National Mall is occupied with an eclectic mix of peace campaigners, environmental activists and anti-Trump movement supporters. Popular musical artists have co-ordinated to stage a series of ‘One World’ peace concerts, which have acted as a focus for young people’s anxieties. In Oakland, California and Portland, Oregon, anti-war and anti-Trump protests have degenerated into riots resulting in a number of police officers being injured and millions of dollars of damage to private property being caused by fire.

Throughout the crisis, oil and other commodity prices have soared. The US economy has been hit by inflation and declining exports, with manufacturing in particular being badly affected by an increase in the cost of raw materials, although by early 2020 economic issues are far from the top of everyone’s concerns. Anti-US sentiment has increased around the world; the State Department has issued warnings against travelling to the Middle East, China and other parts of East Asia and advised ‘special precautions when traveling to Europe and Africa’. Stocks in big US multinational companies have fallen and the global situation has prevented free and easy travel. Financial institutions have begun making plans to close down major offshore departments to be repatriated to US soil. Trump has shouldered much of the blame for his management of the military and economic crisis. His prospects in the 2020 Presidential election look poor, in contrast to his potential Democratic rivals who are all offering a firm, sensible and decisive resolution to the situation.

By early 2020, the US political system has become paralysed by the China submarine crisis. Resolving it and securing the return of the US submarine and its crew have been the sole focus of Trump’s administration. Economic conditions have worsened significantly, limiting the government’s ability to raise taxes, while spending on the military and intelligence agencies has risen dramatically during President Trump’s first term. The cumulative effect has been a significant squeeze on spending in by other departments and an increase in government borrowing. The US has lost standing internationally and has been made to appear aggressive and erratic. However, the very real threat of international conflict has forced NATO allies (reluctantly, in some cases) to support the US in its increasingly acrimonious diplomatic engagements with the Chinese and Russians.