The British government's choice to suspend flights from Sharm el-Sheikh, based on 'intelligence reports', makes an interesting subject for decision-analysis. On the benefit side is the (assumed) avoidance of an unacceptable risk of fatalities either by moving passengers geographically (to another airport) or temporally (by delaying flights for some period of time), and the longer-term reduction in risk through pressure on the Egyptians to improve airport security. On the cost side are the potential increased risk to those passengers through remaining in Sharm el-Sheikh, and the material costs (time, money) of delayed return to the UK. By making a few back-of-the-envelope calculations, we can get a sense of what the scales of these various risks and costs are, and draw some inferences about the UK government's decision calculus.

Before considering the specifics of the case, it's useful to look at the data on background terrorism risk levels. The Global Terrorism Database is the go-to source for this kind of information, even though the latest full database only runs up to the end of 2014 and therefore doesn't include recent events such as the bombing of the Italian consulate in Cairo or the downing of Flight 9268 (if this were to prove the work of IS).
Despite the conclusions our reptilian brains might draw from the background noise of an 'ever more dangerous world', for people living outside countries such as Syria, Iraq, Nigeria and Afghanistan, terrorism risks are minuscule. In the UK in 2010 (the latest year for which comprehensive cause-of-death data are available), no-one died in any terrorist attacks, but 34 died of bullous pemphigoid - we'd never heard of it either. Even in Iraq, an average of 5,400 people a year were killed in terrorist incidents in 2010-2014, compared to a reported 10,000 from road traffic accidents in 2014.

You're pretty safe here
Between 2010-2014, around 130 people a year died in terrorist attacks in Egypt. Given Egypt's population (80m), this means that a day spent in Egypt would have exposed you to around a 1-in-250,000,000 chance of dying in a terrorist attack. We might suppose that tourists were particularly likely to be targeted, but this is not so - only 3% of attacks targeted tourists, and of these, not a single one was fatal in the whole five year period.
What about terrorism against non-military aircraft? Throughout that period, there were no terrorist attacks against such aircraft in Egypt, and there were only four such attacks throughout the region between 2010-2014. With such low-frequency events, we get a better idea of background risk looking at the global figures. The wider trend is clear: aviation is safer than ever. Looking at terrorism risks in particular, between 2010-2014 there were just 17 attacks of any kind on non-military aircraft, with 306 fatalities, but 298 of these were in a single incident: MH17. The risk of dying in a terrorist attack during a flight is therefore probably around 1-in-50,000,000. Five times more dangerous than the terrorism risk of spending a day in Egypt, but still negligible, particularly in comparison with terrestrial means of getting home.

Finally, given that the stranded passengers will be hanging around in the airport for longer, we should consider the background risk of terrorist attacks on those targets. Perhaps unsurprisingly, attacks on airports are more frequent, but considerably less deadly, than those on aircraft. 227 people were killed in 118 attacks on airports worldwide between 2010-2014. (Two of those attacks were in Egypt, with one fatality between them.) On average, this is a terrorism death once every eight days in airports worldwide. Perhaps around 16,000,000 hours are spent by people in airports per day (assuming 8,000,000 flights and 2 hours of airport-time per flight), so this works out at around one terrorism death every 130,000,000 hours spent in airports. To put it another way, about 150 minutes in an airport is as risky as the flight you take, and 24 hours in an airport exposes you to about a 1-in-5,000,000 chance of dying in a terrorist attack. It would certainly be safer to make your way back to the centre of town for a mint tea as most of the passengers at Sharm seem to have done. 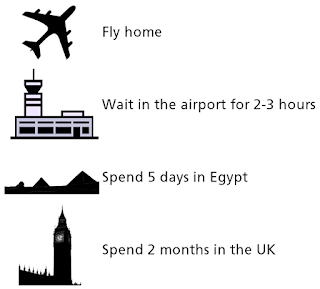 With these figures serving as anchor points, we can speculate as to what intelligence the UK government might have received, and consider its possible implications for the relative risks of postponing the flights versus allowing them to continue.
'It was a bomb'
The media are suggesting that the intelligence reports related to Flight 9268, and specifically that it was destroyed by a bomb. If this is all the intelligence reports suggested, then the only implication for future terrorism risk is if there is a clustering effect. The data for Egypt suggest a small clustering effect, such that the risk of a terrorist attack (of any kind) is around 15% higher on the same day as another attack, but this effect disappears thenceforth. Using the figures above, there might therefore be a rationale for sending passengers home on the day that Flight 9268 went down - a Saturday - but the travel ban was imposed on the following Wednesday. Assuming the UK government is acting to minimise risks, we might be able to assume that the intelligence also related to raised future threat levels.
'There is a general threat'
If the intelligence suggested a higher general threat level, this might appear to justify the travel ban. But if a 'general' threat increase applies to all terrorism risks in Egypt, including against flights, the figures presented above suggest that the best thing to do would be to fly passengers home as quickly as possible: the flight is unavoidable, and getting back to the UK would definitely be safer than spending time in the airport or roaming around Egypt, even at (albeit negligible) background risk levels.
'There is a specific threat'
It's possible the intelligence related to a specific threat against certain flights in a certain area or at certain defined times. If this is so, then the extent of increased risk is impossible to guess, but if the intelligence were credible enough it could easily justify the temporary travel ban.

Scarier than a terrorist
The decision may not entirely have been driven by short-term risk minimisation. The UK government may hope that the Egyptians will be pressured into improving airport security, for a longer-term gain. But the decision is also costly - for the stranded people, for the Egyptian tourist industry, and (one assumes) for the Egyptian government in terms of increased security spending. The reduction in risk would have to be very significant or very long term, if this were the only goal of the UK's decision. Since 1970, an average of around 60-70 aircraft passengers a year have been killed in terrorist attacks worldwide. If we include indirect deaths from airborne terrorism (e.g. the people in the World Trade Centre) then this average figure would roughly double, but would still be lower than the number of people killed each year by either hippos, lions or buffalo. In other words, the risk from aviation terrorism is already so low that there are probably few gains left to be had from improved security.