There are many ways to express something's probability. Using the usual decimal method (0 to 1) is convenient for a number of reasons, and particularly when thinking in terms of risk and expected outcomes. But it doesn't handle inference very well - inference being the process of incorporating information into one's probabilistic judgements. The reason is that the impact of a piece of information on a decimal probability differs depending on what probability you start with. 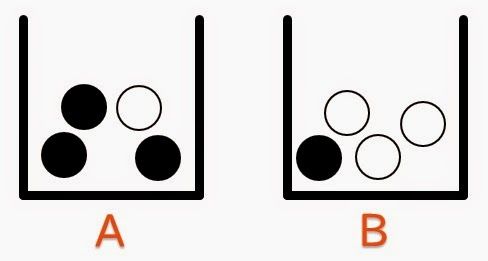 Thinking in odds makes things a bit simpler. Drawing a black ball has an evidential odds ratio of 3:1 in favour of urn A; in other words, a black ball is three times more probable if urn A has been chosen than if urn B was chosen. Starting with odds of 1:1 (i.e. 50%), the first black ball raises the odds to 3:1. The next has a similar effect, raising the odds from 3:1 (75%) to 9:1 (90%). The odds are raised by the same factor (three) in both cases, respecting the fact that the information was the same.

Expressing probabilities in terms of odds makes it easier to separate our base rate (the probability we started with) from the evidence (the new information that affects the probability). For this reason, there is growing support for the use of odds to express the evidential power of scientific experiments, as an alternative to the perpetually-counterintuitive significance test.