A Simple Rule for Decisions under Uncertainty 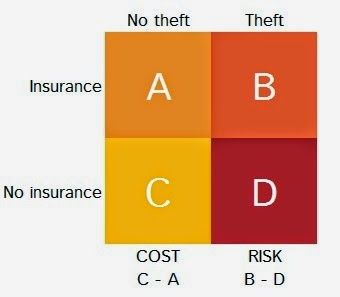 When you've calculated 'cost' and 'risk', the 'critical probability' is calculated as follows:

We can illustrate this by running with the example of insurance. Suppose we have a £500 camera that we are taking on holiday and which we are wondering about insuring. We are offered insurance that costs £20, with a £40 excess. We put the outcomes into the grid as follows: 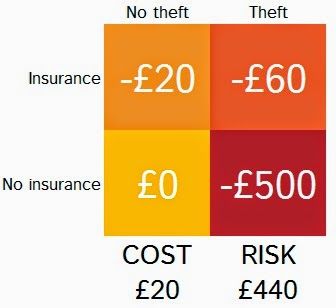 According to the formula above, this gives us a 'critical probability' of 20 / 460, or about 4.3%. This means that if the probability of theft exceeds this, we should take the insurance. If the probability is lower, we should risk it.
Incidentally, the labelling of the two metrics as 'cost' and 'risk', while convenient, is rather arbitrary and depends on the idea of there being a 'do nothing' baseline. In general, thinking of one of your options as a 'baseline' can be harmful to good decision-making as it can stimulate biases such as the endowment effect. It's best to think of the two things simply as values that help determine a decision.